Sounds of … something. Negotiating noises and voices.

Fall is conference season, and this year is no exception. I am very happy that my submission for the 3rd International Ambiances Network Conference & Workshop in Munich (October 6th – 8th) has been accepted. The title of the conference is Urban Design & Urban Society. The emergence of urban atmospheres between design practice and social invention. My contribution has been placed into the October 8th session called Resisting bodies: provoking atmospheres, which should fit the profile of my presentation really well. As the organizers (Rainer Kazig, Monika Popp and Damien Masson) are known for their ability to create productive and stimulating sessions, I am quite sure that we’ll have some excellent discussions in Munich.
The title for my presentation is Sounds of … something. Negotiating noises and voices, following you can read the abstract:

Urban spaces are permeated by sounds. Machines, people, animals, the elements – they all contribute to one of the more difficult to grasp aspects of urban life. In this presentation I will focus on the sounds that I recorded in the context of videotaping different spaces of mobility. I will pay particular attention to how sound establishes atmospheres both through its presence and its absence. The day-night cycle of a railway terminal, for example, produces strikingly different soundscapes. Practices that would get lost during the bustle of the rush hour easily capture the attention of the few who are present during the quiet hours, when night has fallen. To gain attention during the busy times, people and things need to produce sounds of a much higher volume or suddenness, while even a slight change in tune might become perceivable at other times.

These soundscapes are not just passively consumed, they are negotiated with acuity and in interaction with others who are either co-present – but sometimes they are also produced in relation to a perceived absence. It is these negotiations that are at the heart of my presentation. How do people use their voice or other sounds that they produce to establish territories, to influence the way they and the space through which they move are perceived by others and themselves? How do people display attention to or ignorance of specific sounds which they might deem to be inappropriate or not worthy of attention? How are other spaces established through sound?

All of these questions also relate to the question of resistance in urban space. Two aspects of resistance or urban critique are particularly problematic or open to interpretation in this context: on the one hand, many tactics employed by those seeking to critically relate to atmospheres as they are commonly established in controlled and commercialized urban spaces have limited impact because they are just that: tactics. Understood with de Certeau, they offer limited control over time, but almost no control over space. They appear and quickly fade away. Just as sounds do. But maybe they will leave an echo? This question leads to the other aspect: in how far are the soundscapes of resistance the stratified practices of a specific group of people that distinguishes itself from the masses of consumers through their specific taste, for example through ironic references to mass taste, or through references to aesthetics that are only accessible for those who are socialized to place themselves in the upper strata of the cultural field? Answering this second question is necessary if one wants to understand the multiple ways in which the urban experience is negotiated by all the different participants – how normality is challenged and by whom; and how far sounds can leave echoes in urban space and in the corporeality of its inhabitants that might be evoked at other times and in other places too. 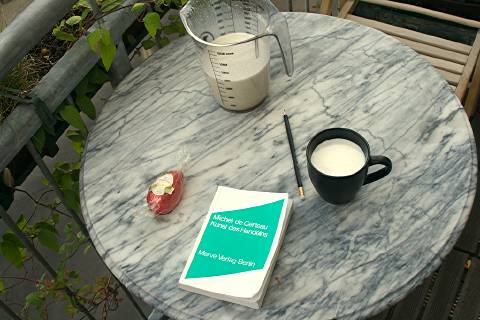