Video research in the open – researcher, camera, and others.

Next week I will participate in the workshop Video Interaction Analysis – and how to do it (program (PDF)). Here is my abstract:

In this presentation I will put the actual presence of researcher and camera in the field into focus. After positioning the actant bundle researcher-camera in the hierarchically structured social field of the railway terminal, I will present several video sequences. These sequences demonstrate techniques employed both by the people in the camera’s perspective and by the researcher-camera – techniques in which distance and the controlled normality of the terminal are maintained. However, other sequences show how this normality is frequently broken and challenged. People are getting closer than is expected, they approach, inspect, conspire with, and question the bundle researcher-camera. Taken together, an emergent set of practices is being analyzed: strategies and tactics that make video research in the open an exciting but also ambivalent process.

The workshop is organized by the DFG research project The effect of computerized knowledge in the operating theatre, from a gender perspective, which is based at Humboldt-University Berlin, Institute for Social Sciences.

I entered the cinema like I prefer to do it: not knowing what the movie I am going to see is about. I only knew the title. Sunshine. Not very telling, isn’t it? And I knew that someone said it’s good. Equipped with popcorn and a beer and being in good company, I passed a poster that told me the director (Danny Boyle) also is responsible for Trainspotting. Exciting news. The near-apocalyptic, space ship setting of the movie took me by surprise. The well-told story and a range of interesting characters created a good base for a good film. All of this is set into scene with a good camera and several well-cast actors (we know Michelle Yeoh from Crouching Tiger, Hidden Dragon). If you are into sci-fi movies that at least try to present natural laws and physics as they should work, you should better forget all of this kind of knowledge before watching. The story-telling and the search for interesting scenes has dictated what is possible, how quickly people freeze in space and makes fun of the concept of gravity. On the other hand, this has produced some beautiful, some eerie and some shocker-style effects. Taken together, this is a solidly entertaining, well done (that is: not a-point) movie.
As the crew of the space ship gets closer and closer to the sun, trying to nuke it back into activity, we lost sound in the Rex cinema in Darmstadt. The movie lost its voice, the crew was getting closer to being roasted every minute, and we were recompensated with a popcorn voucher after the movie. Stay tuned if you want to know the occasion during which I consumed the free popcorn.
IMDb entry | Trailer

I do not know how the German comic language expression hmpf should be translated to English. It expresses a certain discontent, mixed with a dose of frustration and recognition of the fact that the cause of the hmpf will not easily be removed. This describes my feeling towards this movie pretty accurately. I went to see it because of the aesthetics. Comic style – since it is an apaption of a graphic novel by Frank Miller. Who is known for his violent style. Well, the movie is violent too, of course. One thing that was interesting to me was to experience a qualification in my attachment to grittiness. I think I may have written gritty is good in some other movie reviews here. This is not necessarily true. The Spartans were dirty, their helmets, shields and weapons were dented and dirty too. The was a lot of soil and blood. But it was not good. Maybe, I could argue that this was not really gritty: there was dirt and blood – but there was no pain. The 300 Spartans died. But they did not feel actual pain. Or confusion. All characters and emotions were clean. That is not what I mean when I say I like gritty. Too much perfection. And don’t get me started about the politics and philosphy of this movie. There is a measurable degree of fascism going on. There is a lot of really bad stereotyping of minorities of all kinds. And no irony. If this would be the next thing after postmodernism: I don’t want it! I can only recommend this movie to one group: those who have an interest in representations of violence. (By the way, the story is not exactly gripping either.)
IMDb entry | Trailer

Balcony with a view. 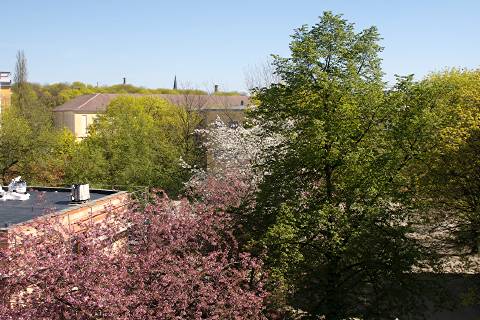 Just in case you are wondering why the balcony topic turns up every year around April: to the left you see the explanation. I have neither fiddled with the colors, nor did I go to any length to get at this perspective. Just come over and visit me these days, walk out onto the balcony and take a deep breath… The anticipation of finally experiencing this view helps me get through the winter.
In the lower left (behind the blossoming cherry tree) you can see the newly built Waldorf Kindergarten.

From Fog to Frühling.

This morning at 6:15, Kerstin and I left our cozy apartment on Juist, entering the thick fog outside. During the walk from the Loog to the harbor, we collected dew on our brows (and sweat on our backs because – surprise, surprise – we were somewhat late-ish). The fog started to lift while we were riding the train through East Frisian meadows. When we made a stop in Oldenburg, the sky was clear and the sun showed off its regained strength. We have never been to Oldenburg before, but it seems nice enough to visit even when the sun is not shining. In Bremen we split: Kerstin is testing the newly established Ryanair connection Bremen–Torp, while I continued on to Berlin. In Hannover Hbf I stowed away my jacket. Arriving in Berlin I encountered people in T-Shirts, realized that the cherry tree is opening its first buds, and now at 19:20 I am sitting here on the balcony and am astounded by the fact that I do not freeze even though the sun is setting on the other side of our house. And the best thing is: this summer I won’t have to stay inside, sweating into the towel wrapped around my chair and writing my dissertation! Ah, mercy to those poor souls who still have to finish their dissertations… (The word chuckle comes to mind.)