Questioning the limits and problems of resistance in public space.

More good news. The session proposed to the 2013 conference of the RGS–IBG (28 – 30 August) by Lars Meier and me was accepted in full, so that we will have two consecutive time slots. This should allow for a good framing and many opportunities for discussion and shared development of our theme.

We are really happy that this worked out so well and are looking forward very much to going into more depth with the problematic sides of art and resistance in public spaces, which we really think is tremendously under-researched, as political and artist action seems quite prone to turning a blind eye towards its own reach and its potentials for exclusion.

Below you will find the program for both sessions. The final program is not yet set up, so we don’t know the exact date & time:

Resistance in public spaces – Questions of distinction, duration and expansion (1)

Lars Meier and I are planning to host a session at this year’s conference of the Royal Geographical Society – Insitute of British Geographers in London. The title for the session is:

Resistance in public spaces – Questions of distinction, duration and expansion

In this session, we want to discuss the limits of resistance in public places in the context of artistic practice and political movements. While actions such as impromptu performances, entities such as flash mobs or practices like street art are often referred to as instances of opportunities for social change, their actual effects remain understudied. If the ‘right to the city’ is at stake here, however, it is necessary not only to reflect about possibilities for alternative development or about artistic ideals. It becomes necessary to study the manifold ways in which such practices, entities or events enter the practices of those who are in the places where they occur. We would propose that three distinct dimensions are important in this undertaking:

Distinction: Understood in a Bourdieuan sense, what are the positions of those who enact and those who perceive artistic expression or countercultural performance? Where in the social and cultural fields are they located and how do they present themselves in relation to everyday culture and the avant-garde? How will people with different taste be emotionally affected by performances and will the experience change or stabilize their aesthetic preferences? Do artists/protesters bridge social distinction or do they perhaps even enforce or solidify it?

Duration: How long does the event last? When do the last traces of an act of resistance disappear? Here, it becomes important to think both about the materiality of places and about memory, the duration of sensual impressions, both on a social and individual level. In addition, the role of recording technologies is complex: while they do serve to extend the time frame in which the event can be ‘witnessed’, they also fundamentally change the access to an event, which is now mediated in a different way and also accessed by a different set of people (youtube users instead of passers-by etc.).

Expansion: What is the spatial scale of the act, entity or performance? Does it affect only a very limited space or is the reach much wider? The geography of resistance is of crucial importance if one wants to understand its spatial implications. Accordingly, we would like to invite presentations to examine the sensual and material extension of practices of resistance.

We especially want to encourage people to consider connections of art and resistance with current political movements and protests like in Arabian countries, Russia or China or the economical and political crisis in Europe.

We would like to invite presentations that use concrete instances as the basis of arguments about how resistance plays out in public places and where it fails to bridge socio-cultural divisions. We are particularly interested in the limits of resistance and in the ways in which these limits could be extended. At the same time, it remains an open question to us if an extension of limits is actually to be wished for or not, since such an extension might also serve to water down the intended effect itself. In short, we are looking forward to explore the ambivalences of resistance together with the other presenters and with the audience.

Please send abstracts of around 200 words to Lars Frers (lars.frers@hit.no) until 27th of January 2013. 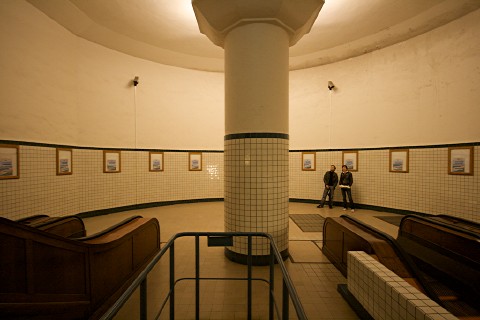 Three weeks ago, Alexander Schellow and I conducted a workshop called spatial research at the advanced performance training part of the apass school in Antwerp, Belgium. I was a bit anxious about the workshop, even though Alexander and I tried to prepare as well as we could for an open-ended and individualized workshop setting such as the one we offered for the people in Antwerp. I guess the anxiety stemmed from the fact that I did not have any experience in teaching artists and therefore was not sure if our interaction would be productive or not.

To my relief, the cooperation was great – two of my main qualifications (knowledge about social theories of space & spatiality on the one hand, experience with different ethnographic field-work settings on the other hand) were very useful for them and the participants really tapped me for all of the advice that I could give them. Of course, what they do with that advice is different when compared to people from a university setting. But there was more than enough overlap to make the experience highly stimulating for me too. As I posted on Facebook: Artist may not be the better sociologists, but they can be sociologesques with brilliant ideas!
To give you a bit more information to work with: One project posed the greatest difficulties but – exactly because of that – it also was the most productive for all involved. One of the students is interested in violence and bodily injury – so we decided that for the short time that we have for the workshop (about two days in the field) he might want spend some time in the entrance area of a hospital, to get a feeling for how physical pain, injuries and sickness embed themselves and are produced in a specific place. When he spent time in the area, he took photographs, which obviously got him into trouble quite quickly. But after a stressful encounter with the hospital staff, some attempts at repairing trust by Alexander and me, several talks about this, and the ritualized deletion of the pictures, the student/artist developed a really excellent presentation that very forcefully evoked a feeling of the place, of the presence and abscence of the place in his presentation, of the loss of the photographs, and of the ambivalence of privacy, voyeurism, pain and empathy. It was more than thrilling – and it was only one of the many really excellent projects that the participants came up with in only a week. In a way, one could say that this was a first encounter with non-representational theory made practice.

If you want to take a brief look at the some of the things that people came up with, you can check the description of the workshop on the web, where some of the projects are presented (the links to the individual projects are in the box on the left side of the page).

To get back to the wonderful German saying “to make yourself to the spoon” (literal translation of “sich zum Löffel machen”“, which is more accurately translated as “make a spoon of yourself”) I want to report something which I just saw on NRK 1, a public Norwegian TV channel. A high ranking, uniformed police officer was interviewed about the recent theft of The Scream, the famous painting by Edvard Munch. During the interview he pulled a mask over his face, a mask like the one used by the robbers in the museum. Funny thing is, he kept this mask on for quite a while, answering the questions of the interviewer in the most serious manner. It was totally hilarious. It has been a while since I saw a uniformed person make himself to the spoon in front of a camera in such a blatant way. Still extraordinarily amused, yours truly.