Route interruptus. A Study of Fatigue, Erosion and other material agencies at rest stops of the Norwegian Tourist Route. 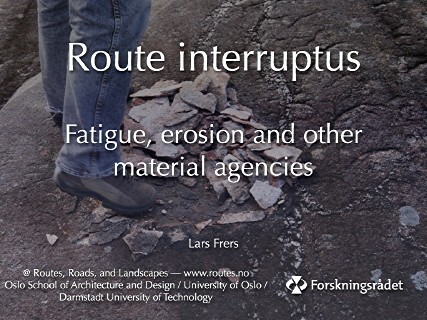 This week, I found myself in Manchester once more. I was called to port by the annual conference of the Royal Geographical Society (RGS–IBG), which might just be my favorite disciplanary organisation conference. Small enough to allow one to meet people frequently, diverse enough to collect many different approaches, and – in the fields of interest for me – open for risky submissions, non-standard formats and innovative presentations. In addition, you will usually find a session or two where people speak very openly about the difficulties of their field work – both on an intellectual but, even more important, also on an emotional level. I guess most of these kinds of sessions are convened and chaired by female researchers that are still in the first decade of their careers… hopefully this is not only an age-related thing but a generational change that continues even when people advance further in their academic standing.
This is what I talked about:

Things, people, and information do not flow without resistances. In this presentation, I will delve into the bodily and material aspects of mobility, displaying how bodily fatigue and the erosion of matter intersect at rest stops along the Norwegian Tourist Route. On this route, the impressive fjord landscape is framed and presented to the travelers at several rest stops that have been artistically designed. Combining video analysis and photography with ethnographic fieldwork, the study focuses on the mundane everyday life, on the resistances as well as the attractions that guide the perception and action of those who spend some time at these places. Particular attention will also be paid to the ways in which the practices that happen at this place change the place itself – situationally but also in a slower, long-term process that will be explored by quasi-archeological investigations into the traces and the detritus that gather at these places. Thus it will be shown how material and bodily processes challenge and undermine the framed presentation of landscape – but it will also be shown that these processes bear a potential of delightful pleasures, unintended uses, and subtle reconfigurations of the socio-spatial order of these places.

As usual, I have recorded the presentation so that you can download and watch it yourself (16 minutes):
Ogg Theora movie (35.5 MB, play with VLC) | QuickTime movie (29.3 MB, play with QuickTime).

A change of air. Once more.

I like all seasons in their own peculiar ways. During the last years, summer has been Berlin–Germany–home in-between time. Work obligations and monetary restrictions did not allow for real holidays, so that July and August became a mix. A mingling of places: refreshing apartments so that they can be sublet once more without a bad conscience; reading and writing and applying for jobs and wrangling with deadlines; hanging out on balconies; visiting family and seeing friends and trying not to get caught up in obligations too much to not enjoy seeing all of these; enjoying Berlin nights; saying goodbye again to the place that you miss but do not want to miss, because this only makes things harder; riding the bicycle through warm summer fields; trying to keep an eye on expenses; looking out for good deals on necessary and not so necessary stuff; loving to be where you are right now, while trying to be looking forward to where you will be tomorrow, and not being too sad about where you left the day before… Tomorrow, I will let the wind carry me back to Oslo.

Video research in the open. Encounters involving the researcher-camera.

A few months ago, the book Video Interaction Analysis – Methods and Methodology, edited by Ulrike Tikvah Kissmann has been published. Since this is my first purely methodological publication, I am really looking forward to see how it is received. The opening paragraph of my chapter reads like this:

Filming is an encounter. The person wielding the camera, the camera itself, and the people and things around them enter a dynamic relationship. This relationship unfolds itself according to the rules set by the social, spatial, and material features and practices that constitute it. These features and practices constitute it, but they do not determine it in a linear way – too many contingencies enter the interaction process, disrupting, changing, or reorienting it. […] In this essay, I will focus on the surprising, unplanned side of doing video research, pointing out both the risks and the opportunities that are part and parcel of filming non-staged everyday life in public settings.

After discussing how I am located in the social field as a researcher – in connection to Bourdieu’s discussion of the social field – I switch dimensions and start to discuss my position in the material field:

But what about the position in the material field? Is that not the same thing as the geographical location? In the way that materiality is conceptualized for this essay, there is more to this position than physical location. Drawing both on Merleau-Ponty’s phenomenology of the body (Merleau-Ponty, 1962; Merleau-Ponty and Lefort, 1968) and on works published in the wide field of science and technology studies (Garfinkel et al., 1981; Latour, 1987; Pickering, 1995), I want to propose that the position I take as a bodily actor in the material field at least temporarily becomes that of a hybrid of man and machine: a camera-researcher. The way I position myself is guided by the way I observe with and as the camera, by the way the camera observes with and as me.

These are the two main conceptual vectors which propel the discussion forward: a focus on the open-ended encounters that constitute the field work itself, and an STS focus that helps the analysis to not take the camera itself for granted, making it disappear behind the hand and the eye of the researcher. Equipped with this two vectors, I try to thrust into some problematic aspects of ethnographic research in general and of video-based research in particular. 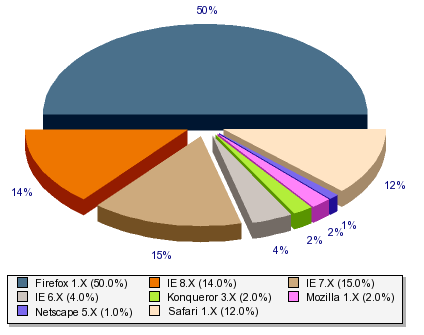 Well, it is more than five years ago that I blogged about the fading away of people using Netscape Navigator 4.x versions to visit my website, a year later about the reduction in people browsing my site with Internet Explorer 5.x and about the first sightings of Internet Explorer 7.
Today things are different, and Microsoft’s Internet Explorer 6.x is the beast that keeps me from implementing cleaner HTML code for this website. But there are good news: In the last months, the number of people visiting this site with Internet Explorer 6.x has more and more often been smaller than the number of users browsing the web with the current 8.x incarnation of the beast. This is good news, because the new version 8.x is much more standards compliant and it finally, finally supports the use of the quote tag <q>. That means that more people will acutally see the quotation marks around the quotes (“” for English, „“ for German) that I coded into this blog and the other pages offered here.
When the amount of IE 6.x users consistently remains below three percent, I will kick out the hacks that I put into the code to work around IE 6.x’s annoyances. Maybe that will also be the day when I will introduce the first pages that are coded in HTML 5, something that I am really looking forward to because the new <video> element will make embedding video in a standards conformant way much easier.

Living the beach. Eyes, Feet and, of course, Hearts. 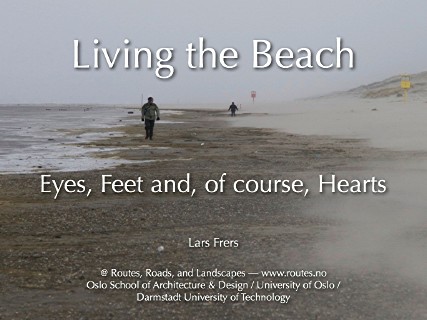 After leaving the conference on creative destruction in Leipzig, I had to take a night train to get to the next academic event, the conference ‘Twixt Land and Sea: The Beach in Literature, Film and Cultural Theory, which was hosted by the University of Berne in Switzerland. I was really saddened that I missed the first two days of the conference, but somehow my e-mail address got off the list for the beaches conferences so that I assumed that it would not take place at all and submitted an abstract for the overlapping conference in Leipzig. The confusion created a Lars that felt a bit ruffled when he arrived in Berne the next morning, having only an hour to get himself straightened up – which succeeded only partially, so that the talk that I gave there was really, really flooded with ehms and, even worse, more than a hundred (no joke!) kind ofs. However, since I otherwise think that the content is worth the while, I got myself reacquainted with my video editing software (Final Cut Express) and edited out most of these annoying fillers. I really hope that the audience did not think I am totally stupid/deviant during the presentation… Whatever. Here is the abstract of the presentation.

The encounter with the beach opens up a new, wide horizon. The eyes can roam over dunes, the shore line, the waves and the many or few bodies of others. Should the temperature allow for it, shoes will be tossed and toes can dig into the grainy sand. The physicality of the beach merges with the corporality of the body. Looking and walking around people perceive themselves in concert with their surroundings. This act of perceiving is not a passive observation, to the contrary, it is a sensual and emotional involvement; it is acting towards yourself, towards material things, social ideals and corporeal others.
In this presentation I will use video and audio recordings to analyze and display how the beach is constituted in human interactions. Usually, “living the beach” is cast as holiday experience. However, in times of climate change another layer of complexity is added to the multi-dimensional experience of the beach. The heart is not only moved by sunsets and flirtations, or the scare of drowning in the ocean, it is also faced with the possible submersion of the landscape in which it thrives. If perceiving the changes created by global warming in everyday life is connected with the experience of your own corporeal self, then it is interesting to examine how climate change enters the sensual relation to the world around you – instead of existing only in the media, on maps and scientific reports. I will try to get a grip on this relationship between the bodily self, climate change and everyday experience to open up a new perspective on the effects of global warming and rising sea levels.

You can also check out the conference program (PDF). As usual, I have recorded the presentation so that you can download and watch it yourself (29 minutes):
Ogg Theora movie (46.3 MB, play with VLC) | QuickTime movie (38.9 MB, play with QuickTime).