From meaning to sense. Accountability on the hither side of words.

Things start to become exciting. On the upcoming conference Sensory Powers and Urban Lives I will give an introductory presentation. This will be the first occasion to speak about my current book-in-progress, which runs under the working title From meaning to sense. Social science in motion. I am really looking forward to present my thoughts in a setting that represents the place of origin (if there is one) for the whole argument: the sensory experience of built environments and the many modes in which it interacts with and affects the sociology and the politics of everyday life. Here is the abstract for my presentation:

The establishment of social control through the design of built space is marked by pervasiveness. In contemporary urban life one is always embedded in, crossing through and permeated by atmospheres, paths and boundaries. Rarely is this power encountered “Head On”, such as the concrete wall against which the migrant hero of the breathtaking movie of the same name crashes. Usually urban life is shaped by more subtle interactions, by changes in texture, rhythm, smell, opacity etc. These changes as such are subtle not because they are small or imperceptible. They are subtle because they are not recognized as such, they establish themselves below the skin, below the threshold of attention. This interplay of material effects and corporal affect is difficult to put into words. If one tries to “capture” this interplay, to get analytic hold of it and to interpret its meaning – then it coagulates to words, loses its characteristic fluidity and power.
How to deal with the characteristic subtlety of the sensory powers that permeate urban life? The social sciences deal with meaning. They provide tools to dissect the meaning that is negotiated in discourses. They can measure what kind and possibly even how much meaning people ascribe to the terms and constructs that one asks them about. They are caught up in the web of words that they capture and produce at the same time. A slight change in tone, a shift in words, however, can signal important differences. What if the interpretation shifts from the interpretation of meaning, of that which is put into static words, to the interpretation of sense, to the interpretation of moving sensibilities, of directions instead of places? What happens if the work of the researcher does not stop at words and their meaning, if it follows the sense of direction that is embodied in, that is constantly generated in the field that is studied? What kind of access to the sensory powers of urban life can be gained by following the sensory, productive, mobile powers of urban life? How can these powers be evoked instead of captured? How can one take hold of the constant flow of events and still unfold and display its character – without transposing it into a realm beyond everyday life, without just producing words, mere signifiers of entities that are not there, shadows of reality? How can subtle powers be made accountable on the hither side of words?

I am really looking forward to discussing these questions with the audience and the other presenters over the course of the two-day conference, which is generously hosted by Mónica Degen and Catharina Thörn.

The Avengers – Whedonesque entertainment without the twist.

Friday I went to the cinema here in Notodden to watch The Avengers. I haven’t seen any of the other Marvell superhero movies except for the 2003 version of Hulk (which stars different actors than the 2008 version that is integrated into The Avengers). As long-time readers know, I am a fan of much of Joss Whedon’s work – Buffy in particular. But the clever sense of humor and the against-the-grain heroes that keep Buffy from being just another wacko teenager-vampire crossover are missing here. We have a pretty much off-the-shelf superhero story, we have a bunch of characters that are not at all explored – and we have a few funny punch lines, special effects and a decent cast. This is good enough for some evening entertainment but it lacks a certain twist… no real human emotions, nothing unexpected in the story. But still, perhaps you’ll find the Hulk’s handling of his main enemy funny enough to chuckle the same way I did.
IMDb entry | trailer

I don’t get the hype about Martin Scorsese. Every year at the Academy Awards he is presented as if he would be this total genius, a director like no one else. I retain some hope that this undue praise is evoked by him being a nice chap whom people like on a personal level. In that case, I can live with it, even though aesthetically or politically, he doesn’t live up to the hype.

This goes true for the most recent Scorsese film, Hugo, which again reaped a bunch of Oscars. We have a poor orphan, so much for the Dickensian element. But this is not all. We also have a strange world of clockworks and craftmanship, a mysterious automaton and a equally mysterious toyshop owner. Of course, the latter soon enough develops father-figure like qualities. No surprise there. Things take a turn for the worse when the movie more and more moves from a story about orphans and automatons to a story about the magic quality of the movies, of early cinema and the wonders it brought to this world. We do now that movie makers like movies. No surprise here. But for me, the shift from the magic of clockworks to the magic of movies felt like a bit of a stretch, there was no real, inner connection between the two.
In any case, there are a few pretty pictures, although less so than I expected after all the awards. I guess the award showers were intensified by the fact that this was a feel-good movie for the movie industry itself – of course members of the Academy like a movie that praises their achievements. In my experience neither the aesthetics nor the story really were moving. Just: moving pictures, some nice ideas, some entertainment.
IMDb entry | trailer

Iron Lady – the individual, not society.

In a way, the movie about Margaret Thatcher’s life takes up one facet of her political stance and bases the whole plot of the movie on this one aspect: the role, the power of the individual. Margaret Thatcher, the Iron Lady, is depicted as the daughter of a politically ambitious and conservative father who runs a grocery store. But what else is there, of the stuff that society is made of? We get one or two scenes hinting at the fact that there was a war sometime when she was younger. But what else, other than Margaret Thatcher, or should I rather say Meryl Streep? What do we see about society and its role in Margaret Streeps life? Not much. The one thing that the movie makes clear is that politics (and the upper strata of the economy) are male and that it takes more than a little courage to enter this male, upper class world as the daughter of a grocer. (Ignorance, for example, is helpful.) What we see is a single individual who works her way through resistances and over obstacles. Not one of many women. A strong individual moving towards her goal, ignoring everything around her.

This is nothing new, and we would have expected little else from Meryl Thatcher. But the main problem for me was, that this everything around her remains on the periphery. The miners’ protests, her family, the changing world at large – they all remain in the background, glance off, seemingly unimportant. The sole exception is: a ghost. The ghost of her husband, who keeps haunting the ageing Stratcher, offering charming glimpses at a life that has just passed by.

In a way, as I wrote above, the movie is consistent. It focuses on a person, only showing the world as this particular person might have seen it. I guess this is legitimate, as MT is indeed special. But. In a case where the hero is anti-social and has had a huge impact on the lives of millions of people, I find it relevant to also show this impact, show how it is ignored, where all the filters are set up that such people use to phase out these parts of reality from their view on the world. (Well, we do get a small glimpse on this when the Falklands War comes up – but again only from her limited perspective.)

Other than that, I have to make a disclaimer and tell you that I am not a huge fan of Meryl Streep. This added to my discomfort, as I also saw the movie as building on the star cult around Streep, with a cinematography that too often focused on the great actress, with long shots of her face, putting her in a position to get just another Oscar, or at least the zillionth nomination for an Academy Award – which can then be used in the further marketing of this movie.
IMDb entry | Trailer

Sociosophy with a beating heart.

I have ogled Michel Serres’ The Five Senses for a long time already. (I must say I am shocked to see that it has been translated into English only in 2008, 23 years after its original publication and 15 years after the German translation.) The title always seemed neat to me, the German subtitle Eine Philosophie der Gemenge und Gemische did so too, and who does not want to demonstrate academic sovereignty with even more Suhrkamp Verlag publications on his or her bookshelf? But it took a reviewer to finally push my nose into the pages of this book – I am writing about fog in an article on absence, and Serres dedicates one of the subchapters of his book to fog…

So today, after reading all the Derrida that this and another reviewer also condemned me to, I finally opened my Five Senses and started to read, my eyes still blurry from staring their way through contorted Derridean sentences. Even before turning pages for the second time, I suddenly realized that my heart was beating loudly. Not just beat, hammer in excitement and anxiety about the next sentence. This is philosophy? I say! Or rather, my heart says: it might be much more than that.

Usually, I might furrow my brows, sometimes sigh or smirk my way through a book on theory or philosophy. Sometimes I might even smile or find that expression of realization or, even better, of wonder on my face. But a thrilled, beating heart? This definitely is a new experience. If only for that: I must recommend reading this book. I have only finished the first subchapter and started on the second one, but if you might be interested in an example of extraordinary writing in academica, then go out and get this book. And don’t wait too long until you start to read it! 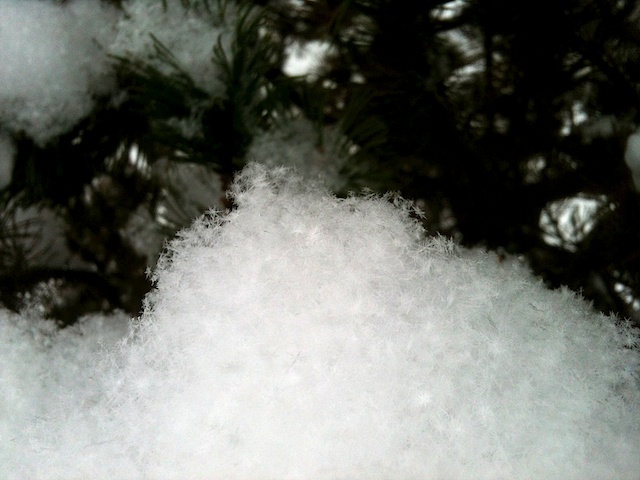 Today I’ve seen the lightest and most ethereal snow ever. Even a tender breath would have blown this pillow of snowflakes apart… 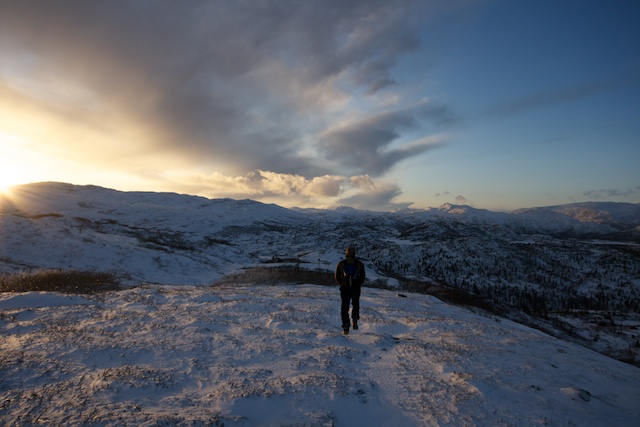 It’s a new job for a new year. After finishing work on the project Geodata, Policing and Urban Development at the University of Hamburg, I have moved back to Norway. To be more exact, I am now a resident of Notodden in Telemark province. Telemark? Yes, Telemark, the home of skiing. Accordingly, two things dominate my life: (a) work, which means publishing articles and developing social science courses for foreign students at Telemark University College. (b) Hiking (before all the snow arrived) and now skiing. Hardangervidda is only a short drive from here, so it looks like this year’s skiing season may well extend deep into April or perhaps even May. Y… I say!