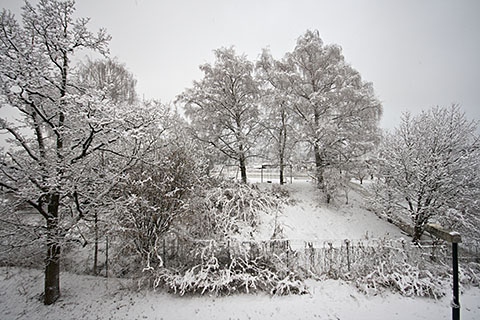 I think clean white sheets on everything are nice way to start into a new environment. My work here in Oslo has not yet begun, but I feel welcome by all the people I have met so far and I am very much looking forward to the time I will spend here.
We’ll see how long it will be…

After some nagging by friends here in Berlin, I got my act together, wrapped myself into my at least 20 year old yellow tarpaulin cape and rode my bike through the wet streets of Berlin, entering the Berghain. This location, a former industrial building which shows huge amounts of concrete when you are inside, hosted the yellowlounge event: Patricia Petibon, who presented her debut album Amoureuses.
Everybody looked like we do: hovering around age 3X, not too stylish, not too mundane. A whole factory full of this kind of people. And in the middle of this peculiar crowd: a small stage with a Steinway & Sons piano. After more than an hour of recorded classical music tracks and light installations, the actual show began, split into two parts of about twenty to thirty minutes. I was quite enchanted by the way the soprano Patricia Petitbon presented her work (classical songs, some taken from operas, but mostly short songs written by composers dead and alive – most in French, many in English, and one or two in Italian). Good voice, of course, but also a charming performance that broke with some of the expectations that you might have about classical singing. I can definitely recommend the live performance – even if you have your doubts about people who can sing so loud that you (a) are vexed by the incongruence of bodily size and voice volume and (b) don’t understand what words they are supposed to sing.