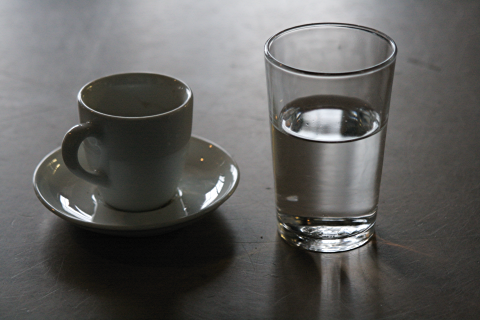 Post-conference hiatus is over.

The conference was quite a success. Nice people, interesting talks, no major disasters. I did not leave Darmstadt immediately to have opportunities for socializing and joining the one-year Diskothek anniversary party in the 603qm which was quite a bit of fun. On sunday I took the night train to Copenhagen, where I … became ill for a few days when the post-stress relaxation set in (probably enhanced by the less than ideal sleeping conditions in the sleeping coach and potentially infected co-sleepers in same coach). However, a few bins filled with handkerchiefs, visits to the local sauna and hearty meals later, I recovered. And now I am back in Berlin. I did some work after the conference though, as you will see in the next entry to this blog.

What would life in Darmstadt be without the 603qm? A bleak and frustrating experience. This Sunday, for example, we enjoyed the Österreichspätstück. The employees of the 603 served Austrian food, and they even created a mountainscape out of cardboard to adorn part of the interior. Lars and I spent a happy afternoon there, lounging, listening to good and unobtrusive tracks, looking at the cardboard alps, and scrutinizing other customers – as every sociologist who is sincere about his or her calling has to.

After a longish wait the opening hour finally draws near: in 5 minutes I will hop over to the 603qm, where the Spätstück is waiting. Me hungry for food and lounging time.

Well, that was something. Friday night we went to the 603qm here in Darmstadt and participated in the Tanz in den Mai party. After a perfect, lazy Friday afternoon with soundchecks, sun, and an impromptu picknick with a few stray raindrops in the air the sounds of the event finally lured a few people from our post-graduate college and me to the place.

The evening opened with a live performance by Stahljustiz called Dance Baader, Dance. First, I just perceived the performance as a somewhat blatantly weird but still funny act, but when the kidnapped victim was portraied as a person, not just a victim, the atmosphere changed for me, and I actually got involved with the performance, giving up some of my distance as an observer.

Turbulenzia, the first band to enter the stage, did not really get me on the hook. Their songs did not have a real profile, were not straight enough, and did not seem to really let loose and rock.

Pornophonique has a new fan. Too bad I missed the opportunity to buy a T-Shirt, since they don’t sell them on their website. I am no music geek, but for me their sound was fresh, funny, and not too ironic. The mixture of gameboy, acoustic guitar, and C64 sounds was a new thing for me. Covering both Britney Spears and AC/DC is cool enough, but their own songs were even better. Sad, Sad Robot already entered my mind during their soundcheck in the afternoon. Felix Hauser is the Vince Clark of the Nintendo Age, while Kai Richter successfully took the difficult route between cute boy and rock’n’roller – together they made a great team on stage. For their future gigs I envision crying girls being carried away because they totally passed out.

Die Türen from Berlin were great. I was surprised that they were playing here in Darmstadt for this party. During the soundcheck I sat with my back to the stage and did not see that they were playing, wondering where and when I heard this cool sound before, asking the waiter if he knew the name of the band which we were hearing. Well, he pointed behind me and said it was them, playing live a few meters behind me. Call me Clint. They got the crowd moving! I just love it when a band is standing on stage, all of them frontally rocking, playing their guitars, everybody singing into their mikes and giving what they got. Which was a lot. Their tracks are very danceable, their German lyrics sometimes even irritatingly good Wenn Du willst, dass alles so bleibt, steh auf. Wenn Du willst, dass alles so bleibt, klatsch in die Hände. NDW meets breakbeat meets punkrock – great band with a website that sucks.

A short report of Saturday Night: The Sumpf is definitely a very pub-ish pub; with aged rockers working behind the bar, a nice selection of beers and whiskies (including a “malt of the week” for € 2.70 – which was a Bushmills in our case) and a relaxed clientele between 23 and 50, most of which were probably between 27 and 35. The music was excellent and quite diverse, as Saturday was an event featuring the Nathalie Bar. Steffen and I stayed until about two o’clock, then we checked out the 603qm which was already closed. We decided to go home and get some sleep. Alas, on my way home I rode past the Schloßkeller, another location which is related to the AStA of the TU Darmstadt. Well, there I stayed late and enjoyed the usual serving of “classic hits”. Sunday was a day of sleeping, relaxation and web site actualization for the post-graduate college’s homepage.

From yuck to yeah.

Lars and I have been to Pizza Hut for lunch today. We shared an x-tra cheesy crust spinach/philadelphia pizza. It was the opposite of delicious – neither crusty nor hot nor spicy nor interesting. It was a bland mixture of dough, sugar and fat, so that both Lars’s felt really bad after swallowing the stuff. To our relief we discoverd the 603 qm – the first really nice cafe/lounge that I have been to here in Darmstadt – to be open on Sundays. The prices are very fair (1 € per espresso) and the crowd relaxed and interesting. After drinking a good hot espresso and trying to look as relaxed and interesting as the others we happily made our way back to the Kraftwerk.